5 years of QE and the distributional effects

As we approach the fifth anniversary of the start of the first quantitative easing program, some are asking the thorny question about the so-called "distributional effects" of these unprecedented programs. Who really benefited since the first QE was launched? There is a great deal of debate on the topic, but here are a couple of facts. Financial asset valuations, particularly in the corporate sector have seen sharp increases. For example the S&P500 index total return (including dividends) has delivered 144% over the 5-year period. Those who had the resources to stay with stock investments were rewarded handsomely.


But what about those who didn't have such an opportunity? For example savers, particularly retirees who had to stay in cash? They were hurt severely by record low interest rates (negative real rates - see post). And those who had neither the savings nor significant stock investments, relied on house price appreciation or growth in wages. The housing recovery has certainly been helpful (for those who kept their homes), but according to the S&P Case-Shiller Home Price Index, US housing is up less than 5% over the past five years. Not much of a "wealth effect" for those without stock portfolios. And when it comes to wage growth, the situation isn't much better. The chart below shows hourly earnings growth of private sector employees. 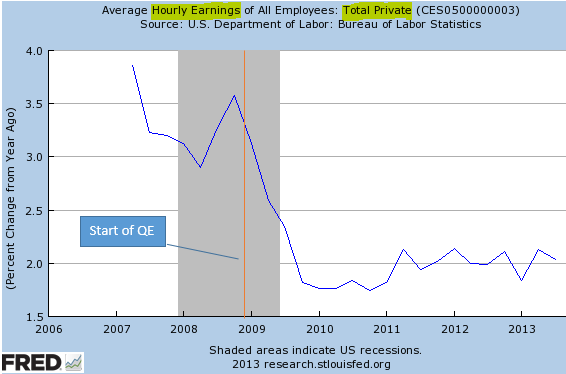 It therefore shouldn't be a surprise that the three rounds of quantitative easing over the past five years rewarded those who had the wherewithal to hold substantial equity investments. Everyone else on the other hand - which is the majority - was not as fortunate.

Perhaps the best illustration of these distributional effects is in the chart below. It shows the relative performance of luxury goods shares with wealthier clients vs. retail outfits that target the middle class. The benefits of QE are clearly not felt equally by the two groups.


So as we prepare for the Janet Yellen's ultra-dovish Fed (see story), it's worth thinking about the past five years and the cost of growing distributional effects in the United States. For now there is plenty more cheap money to help those with large stock portfolios.


JPMorgan: - There are debates about whether a 0% cost of money helps anything except financial asset prices ... All we know is that the Fed has a story to tell (“cheap money is good”) and they are sticking to it.