US debt ceiling risk: out of sight, out of mind 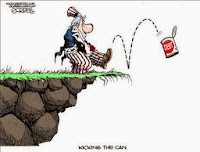 The impasse over the US debt ceiling came and went - and with it the public's interest in the subject. The short-term treasury curve which became inverted back in October (see post) went back to normal.

There is a budget deal now in place that should prevent another government shutdown for the next couple of years and the issue of the debt ceiling faded into the background. Because the budget fight took place around the same time the debt ceiling was reached, the public bunched the two issues into one - and many now believe that debt ceiling won't be a problem for two years.


And yet the budget deal last week did nothing to avert another debt ceiling fight next year.


CNN: - The [budget] deal would help Congress avert budget brinksmanship for awhile. But it does nothing to prevent another bruising battle over the debt ceiling, which lawmakers must address in just a few months.

The bargain lawmakers struck in October to end the federal government shutdown included a provision to suspend the nation's borrowing limit for a few months. It lets the Treasury Department continue borrowing new money through February 7 without regard to the debt limit. Then, on February 8, the debt limit will automatically reset to a higher level that reflects how much Treasury borrowed during the nearly 4-month suspension period.

At that point, if Congress hasn't agreed to raise the ceiling, Treasury can use "extraordinary measures," the special accounting maneuvers that let it keep paying the country's bills without going over the debt limit and risking default on the nation's obligations.

But those measures are expected to run out sometime between March and June, although Treasury Secretary Jack Lew has warned that based on where things stand now they are not likely to last more than about a month.

The can has been kicked down the road for a few months, and except for the somewhat elevated US sovereign CDS spread (see chart), all is well. The fact that just two months ago the US federal government was toying with the notion of a technical default (see discussion) is now just a bad dream. Out of sight, out of mind.