Markets were not impressed with China's 7.7% annualized 4th quarter GDP, which came in better than expected.


Reuters: - China's economy narrowly missed expectations for growth to hit 14-year lows in 2013, though some economists say a cooldown will be inevitable this year as officials and investors hunker down for difficult reforms.

The chance that the world's second-largest economy may decelerate in coming months was underscored on Monday by data that showed growth in investment and factory output flagged in the final months of last year.

Waning momentum capped China's annual economic growth at a six-month low of 7.7 percent in the October-December quarter, a slowdown some analysts say may deepen this year as China endures the short-term pain of revamping its growth model for the long-term good.

Moreover, some analysts are questioning the validity of China's growth data.


ISI China Research: - ... from what we have seen, we think it would be a mistake for investors to markedly revise their views on China's economy on the basis of these new data.

So a few comments on the process, and what analysts have to work with from the NBS in monitoring China's economy.

Beijing does not report its GDP data in a way that is consistent with the UN standards for the National Income and Product Accounts - the way data is reported in all of the world's modern economies. A little more data will be provided in the next days, but not sufficient detail for anyone to form a well-reasoned judgment of whether the economy and its important components are doing better, about the same or worse.

China does not report a level of Real GDP, ever. There are no historical data, and no contemporary values either.

There is no way to verify the consistency, or lack thereof, of China's reported % y/y and % q/q growth rates. Frustrated by this opacity, and having found internal inconsistencies in these numbers (as opposed to data), we assign no weight to the % q/q numbers provided.

Complicating matters is the new wave of tightening in China's monetary conditions. Once again short-term rates increased suddenly and the PBoC injected additional liquidity this morning (see story). Given how unpredictable the central bank has been in controlling the interbank rates, investors are clearly nervous. 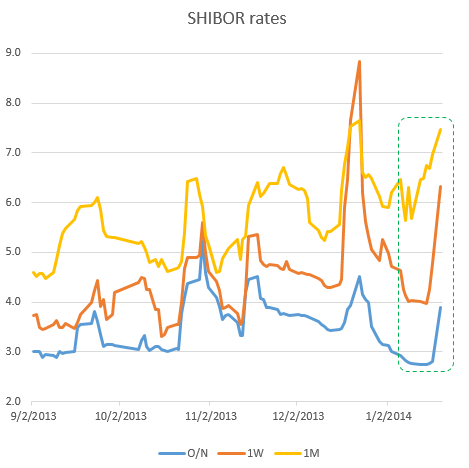 The combination of slowing economic growth, unease with real estate and credit expansion (particularly shadow banking), stronger currency (hurting exports), lack of direction for the corporate sector (see post), and uncertain/volatile monetary stance is creating jitters in China's equity markets. This morning the Shanghai Composite fell below 2000 again (the peak reached in 2008 was around 6000). The last time we were here was during the first PBoC-induced liquidity crunch last summer (see post).