Wage increases are vital for Abenomics - without them the current policies are simply unsustainable (see discussion). If consumers are squeezed (see post), spending will decline and the nation will face deflationary pressures once again. The government is applying pressure on the corporate sector to boost pay. According to ISI Research, the following 5 firms have announced wage increases.
Is this the beginning of a real trend or just a superficial move by some firms who are trying to boost their image? Many analysts remain skeptical.


The Star: - Japanese companies are unlikely to raise wages significantly this year and inflation will be well below the official target, economists said in a Reuters poll, suggesting tough challenges for Prime Minister Shinzo Abe's drive to end years of falling prices and generate robust growth.

The forecasts bolster the view that, with a few high-profile exceptions, businesses are cautious about passing on higher profits to employees, which is seen as vital to Abe's hopes for sustained growth in the world's third-biggest economy.

The economists in the monthly survey are also pessimistic that the Bank of Japan can meet its goal of 2% consumer price inflation by next year. 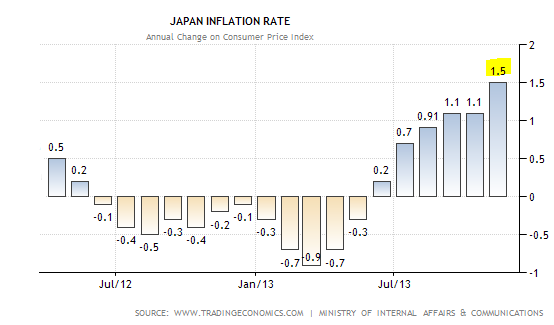