The ECB received another set of disappointing inflation reports today. For some time now the central bank has been betting on the fact the declining inflation figures were driven by food and energy, while the core CPI rate was recovering. Well, that didn't turn out to be the case, at least for now.


With the euro remaining at lofty levels, the ECB is beginning to prepare the markets for new monetary stimulus, as the various officials discuss "unconventional" policy.


BW: - After building a reputation as a nay-sayer on the European Central Bank’s Governing Council, the Bundesbank president’s [Jens Weidmann's] support for large-scale asset purchases marks a shift that helps the fight against deflationary threats. His tentative backing of quantitative easing will shore up its credibility as officials debate whether they need to implement it.


WSJ: - "Should further monetary accommodation be needed, it is reasonable to consider other operations aimed at lowering the term premium. This is where targeted asset purchases enter the toolset of monetary policy," Mr. [Benoit] Coeure said in prepared remarks to an International Monetary Fund conference.


WSJ: - Mr. [Ewald] Nowotny, who is a member of the ECB’s governing council, signaled that his preference would be for any ECB stimulus to be geared toward Europe’s asset-backed securities market, which may in turn boost the flow of credit to the economy. He said he is open to setting a negative rate on bank deposits parked at the ECB, but raised doubts about the effectiveness of such a move.

“We are preparing all the technical aspects of a range of possible interventions,” Mr. Nowotny told The Wall Street Journal on the sidelines of meetings of the International Monetary Fund.

Of course there doesn't seem to be an agreement on the type of unconventional policy the central bank will undertake. Things like a negative deposit rate for example have been discussed. But if the decision is to buy assets, what types of assets would the central bank focus on? Some of the recent discussions centered around ABS securities and other types of bonds that would provide credit to smaller and medium-sized businesses. The problem with this strategy is the market size. Thanks in part to Basel capital rules, the ABS market in Europe isn't sufficiently large (Basel regulators have referred to these securities as "toxic"). And since only the higher rated paper qualifies for ECB collateral (which is presumably the only bonds that the central bank would be permitted to buy), there isn't enough to have a credible QE program.


It seems the ECB wants to stay away from simply buying sovereign debt, particularly of periphery governments (for obvious reasons). Buying only the core states' bonds on the other hand could be even more problematic. Moreover, lowering government bond yields is unlikely to stimulate private credit growth (after all it hasn't thus far). The central may also stay away from uncovered bank bonds for the same reasons it wants to avoid periphery sovereign paper. This leaves corporate paper - bonds and even direct loans to companies bought in the secondary market. Hard to imagine a central bank buying corporate paper, but it has been done in Japan, so why not in the Eurozone?

Deutsche Bank has compiled an excellent chart of the ECB's options based on the effectiveness of the purchases in stimulating growth (getting capital to where it is most needed) vs. the size of the QE program. The tricky part is that the more effective the monetary transmission, the riskier are the assets. 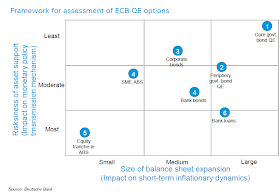 These are some difficult choices for the ECB and the central bank may want to wait longer to see if the inflation picture improves and/or the euro declines. It may however end up being a long wait.