Has inflation in the US bottomed out?

Some analysts are beginning to suggest that inflation in the Unites States may have bottomed. As discussed earlier this years (see post), US inflation indicators were pointing to the lowest rate since 2009. Are the global disinflationary pressures going to push the rate of price increases in the US to new lows or have we hit the bottom?

First of all, what is the market telling us? Market expectations of future inflation remain subdued, with the so-called breakeven (implied from TIPS) rates still near the 3-year low. 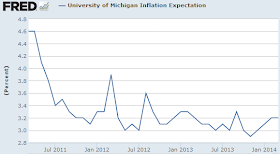 With expectations at the lows, why are some analysts calling the bottom on inflation in the US? Here are a few reasons:

1. Looks like producer prices are showing signs of life, as the latest PPI figure came in above expectations.


The index has recently been changed to include a larger swath of the economy and it was those newer components which showed increases.


GS: - Headline producer prices rose 0.5% in March (vs. consensus +0.1%), while core prices rose 0.6% (vs. consensus +0.2%). The largest contributor to the unexpectedly large gain was trade margins—an implicit profit measure—which rose 1.4%. Within this category, there were large gains in flooring (+8.1%), chemicals (+4.7%), cleaning supplies (+4.0%), and apparel (+3.3%). The stronger March figures in this category followed a 1.0% decline in February, which pulled the core PPI down to -0.2%. The PPI for finished goods ex-food and energy—the "old" core PPI—rose a more typical 0.1%, consistent with subdued pipeline inflation.

Nevertheless this increase got some people thinking.

2. Today's CPI increase was also firmer than expected (see story), a great deal of which was due to rising costs of shelter and food (not great for the US consumer).

3. In spite of the weakness in some commodity prices driven by China's slowdown (see post), commodity indices are generally off the lows.


In particular, the energy sector rallied recently, with both gasoline and natural gas prices on the rise.

4. Some senior Fed officials are beginning to talk about inflation bottoming out (could of course be wishful thinking).


James Bullard: - "One thing you can say is that while inflation has drifted down ... it kind of bottomed out in the past nine months, and I think it's poised to go higher, back towards our target"

Given the data thus far, it's difficult to make a reasonable projection at this point. With low inflation priced in however, any turnaround will take the markets by surprise.