The mass media, bloggers, and various pundits remain quite negative on US labor markets. It's the easy road to take - just repeating the story of the last five years like the constant hum of the Cosmic Background Radiation left over from the Big Bang. You see it even from some of the more economically savvy reporters. Here is a typical reaction to yesterday's initial jobless claims report.


The Motley Fool: - After edging up a revised 1% the previous week following a 9% drop the week before, this latest report deals a blow to April's employment improvements. Analysts had expected an initial-claims increase, but their 313,000 prediction proved overly optimistic.

A "blow"? Not quite. As discussed before, the seasonally adjusted initial claims numbers are often meaningless, particularly around key holidays. The reality is that without the seasonal adjustments, initial jobless claims are now around the level they were at this time in 2006 - and moving lower. April's employment improvement remains intact. 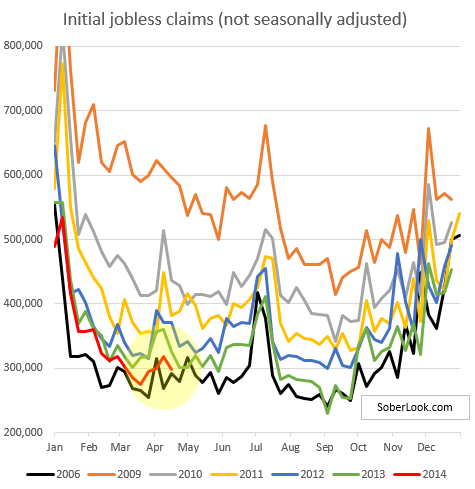 The US job market is firming up, and in the coming months will result in some upside surprises to the official payrolls figures. With all the negative press out there it is often easy to miss the inflection point until we are long past it, sitting with the wrong portfolio on the other side. Well, the inflection point is here.