Consumer credit growth for February came in considerably better than expected in spite of the economic soft patch this winter.

BW: - The $16.5 billion advance in credit exceeded all estimates in a Bloomberg survey of economists and followed a revised $13.8 billion gain in the previous month, Federal Reserve figures showed today in Washington. The median forecast in the Bloomberg survey called for a $14 billion increase.

It is important to point out however that in order to track the actual private sector consumer credit measures, one must remove the government-sponsored student loans that have been distorting these reports. The non-student-loan consumer credit growth has leveled off recently, rising at around 2.5% per year (as opposed to over 5.5% when student loans are included).


This spring we will probably see an improvement in this rate, especially as auto loan demand picks up. However with wage growth remaining subdued at just above 2% per year (see chart below), it should not be a surprise that consumer credit growth has leveled off. Households still remain cautious on leverage. 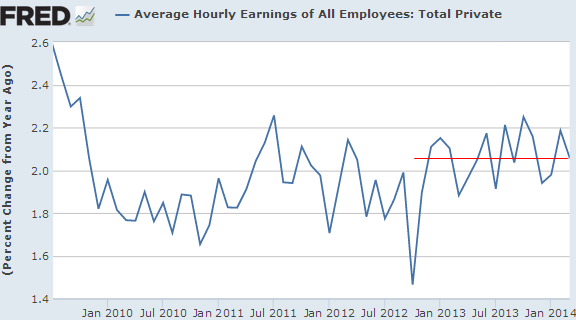 Non-student-loan consumer credit outstanding was growing at a rate that is in the neighborhood of 6% during the years preceding the financial crisis. With wage growth constrained for now, there is little chance we are returning there in the near future.