Shifting bottlenecks in US energy markets

With the startup of TransCanada's Cushing Marketlink pipeline and increased rail shipping of crude directly to the US Gulf Coast (bypassing Cushing, Oklahoma), a new dynamic in the US energy markets is taking shape. The glut of crude at Cushing (see post form 2012) that used to put downward pressure on WTI is over. 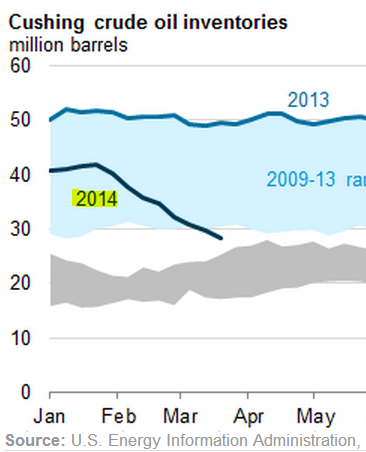 
This development however created another bottleneck. The oversupply of crude has shifted from Oklahoma to the US Gulf Coast.


Bloomberg: - Houston and the rest of the U.S. Gulf Coast have more crude oil than the region can handle. Stockpiles in the region centered on Houston and stretching to New Mexico in the west and Alabama in the east rose to 202 million barrels in the week ended April 4, the most on record, Energy Information Administration data released yesterday show.

One of the key issues is the US crude oil export restriction. Back in the 70s, the US Congress made it illegal to export domestically produced crude oil without a permit. And permits are tough to get these days, given how unpopular the notion of US oil exports seems to be. The Jones Act which restricts shipping among US ports is also adding to the bottleneck.


Bloomberg: - Storage tanks are filling as new pipelines carry light, sweet oil found in shale formations to the coast and U.S. law keeps companies from moving it out. Most crude exports are banned and the 13 ships that can legally move oil between U.S. ports are booked solid. The federal Jones Act restricts domestic seaborne trade to vessels owned, flagged and built in the U.S. and crewed by citizens.

Now it's the refineries who will need to clear this inventory and ultimately export the excess product. And that's exactly what is taking place currently, as idle US refining capacity hits a multi-year low.