The diminishing usefulness of the Fed Funds rate

As the massive over-liquidity in the US banking system reaches new highs, the amount that banks borrow from each other continues to decline. In the past some banks borrowed from other banks in order to meet their reserve requirements, but these days excess reserves are so large, the need for interbank financing has dramatically diminished.


Barclays Research: - The overnight market for unsecured bank loans has shrunk considerably since the Fed’s asset purchases expanded the level of bank reserves to nearly $3trn. With no short base left in the market and massive over-liquidity, banks no longer to need to borrow from each other or the GSEs to meet their reserve requirements. Indeed, overall bank reserves are now 34x bigger than required reserves. 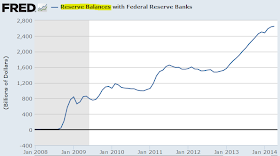 This presents a problem for the Fed. The central bank's main policy tool for setting short-term rates involves targeting the Fed Funds Rate - effectively the average rate at which banks lend to each other overnight. With such lending having declined so dramatically (chart below), the Fed needs other tools to impact short-term rates on a broader scale. Otherwise the central bank would be attempting to influence rates by targeting a relatively narrow set of transactions among a few banks. 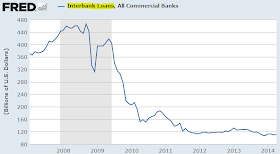 There are two other tools the Fed can potentially use as it prepares to exit the zero-rate policy. One is the interest it pays on excess bank reserves, which is currently at 25bp. If that rate increases, banks would be expected to increase the rates at which they lend out short term funds. That's because banks would always charge more on loans to the private sector than on "lending" to the Fed. And higher rates to the private sector would be the goal of this policy.

The other tool is the Fed's experimental reverse repo facility (fixed rate full allotment reverse repo facility or FRFA) - see post. The advantage of this program is that it broadens the set of counterparties beyond the banking system (see full list here), making a rate increase more effective. In particular FRFA gives money market funds a good alternative to treasury bills (3-month treasury bill now yields 3 basis points). If money market funds can increase yields by lending to the Fed (via FRFA), depositors will be able to earn more on cash. And that in turn will force banks to increase rates on deposits to keep customers from switching from savings accounts into something like the Vanguard Federal Money Market Fund. This program also allows the Fed to drain some of the bloated excess reserves by taking cash out of the system overnight.

With treasury bills near zero, it's not surprising that demand for the reverse repo facility is quite high even at the testing stage.


WSJ: - In her testimony, Ms. Yellen said when the Fed begins tightening credit, it will use a “number of complementary tools” that will collectively “push up the general level of interest rates.” She listed the reverse repos as one of tools that will “likely” be in the mix.

That’s a fairly strong endorsement for the still-experimental reverse repos.

Even in tests, the facility is popular: Operations over recent days have seen the Fed draining around $200 billion a day as participating firms navigate a shortage of short-term Treasury issuance related to the April 15 tax filing deadline and the government’s improving financial position.


Both of these tools, the interest paid on bank reserves and the reverse repo facility, are currently on the table as the Fed debates their potential uses. When the central bank finally hikes interest rates, it won't be just about the Fed Funds Target Rate.