Growth in US reserve balances (funds that banks hold at the Federal Reserve) has stalled recently. Part of the reason for the slower growth is of course the Fed's taper. Yet the Fed's balance sheet is still increasing, albeit at a slower rate. Which means that bank reserves should be growing as well, unless of course some reserves have been "drained". 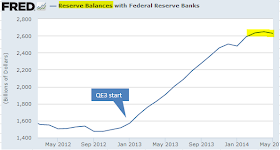 There are a couple of ways the Fed can drain the reserves: sell securities or take in deposits/borrow. It turns out that the Fed is doing the latter by borrowing overnight via reverse repo (RRP). The newly established Overnight Fixed-Rate Reverse Repurchase Agreement program that the Fed has been testing (discussed here) has become quite popular. There is a limit of $10bn per participant (here is the list of counterparties allowed to participate), with the Fed now rolling about $200 bn of reverse repo daily. The experimental program has been ramping up and $200 bn has been drained from the reserves as a result. That's why we see bank reserves growth stalling (chart above). 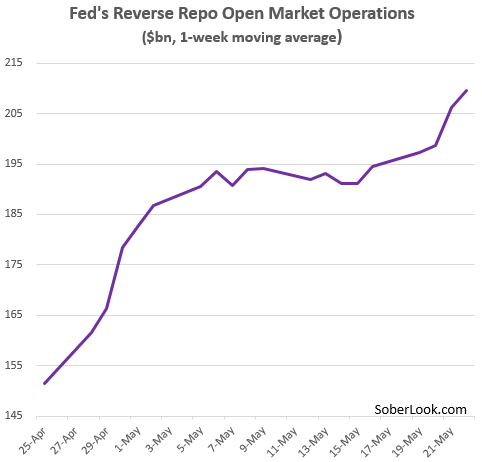 The demand makes sense because this program allows money market funds to earn overnight rates that are higher than treasury bills. Federal Reserve officials are signaling their support for employing this new tool as a way to control the overnight rates.

That's important, he said, because better control over short-term rates is likely to help the Fed keep a lid on inflation and inflation expectations. Under the facility, which the Fed has been testing for a year, banks, dealers, and money market funds effectively make overnight cash loans to the central bank, eliminating that liquidity from the system.

That's why when we finally hear the Fed announcing a rate hike, the central bank will be setting the Fed Funds Rate, the Discount Rate (which is more symbolic at this point), and the RRP Rate - with the latter being the most impactful for the overall economy.