The BoJ's balance sheet is about to go parabolic

The Bank of Japan's balance sheet continues to expand at a fairly constant pace. Relative to the size of the GDP, this is already the largest QE program in the world. Yet some analysts believe that the BoJ will accelerate securities purchases later this year.


Here is why. Credit Suisse for example projects that Japan's inflation rate has peaked and is about to begin declining. In fact CS researchers see a complete divergence between the BoJ's own projection of inflation and reality. A number of other researchers (for example Scotiabank) agree. 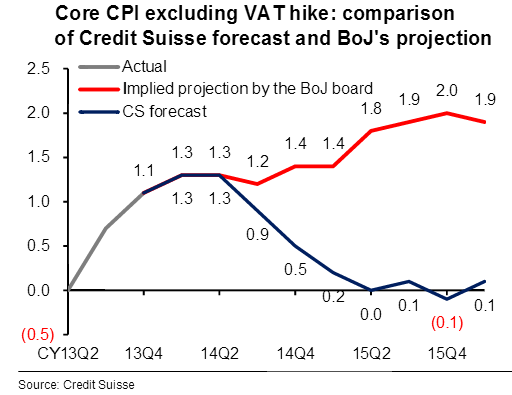 This potential decline in inflation dramatically raises the risk of Japan slipping back into deflation - something that the BoJ and the Abe administration have been desperately trying to avoid. As inflation begins to lag the BoJ's projections, the central bank will accelerate QE to new highs.


CS: - As long as it sticks to its original commitment to achieve +2% CPI inflation by summer 2015, the BoJ is likely to decide on additional monetary easing once underperformance of the actual CPI inflation rate against its projection becomes visible.

The reason many researchers believe Japan's inflation may have peaked has to do with the yen.


As discussed earlier (see post), a great deal of the recent inflation improvements in Japan was the result of weaker yen, which declined sharply in 2013. But more recently the yen has been range-bound (and in fact strengthening against the euro), which will halt a great deal of the price increases we saw earlier. The inflation rate is therefore expected to begin declining.

But can inflation in Japan be sustained without further weakness in the currency? Such an outcome remains unlikely because there is no evidence that labor costs will begin increasing any time soon. It is difficult to sustain price increases without labor costs and wages rising as well.


CS: - We think policymakers are on the wrong track: we refuse to be optimistic about inflation being close to target at end-year given that unit labor costs fell by 2.5% over the last 12 months and seem set to be unchanged for the next year.

This tells us that at some point later this year, the BoJ will shift into an even higher gear. The central bank's already bloated balance sheet will go "parabolic" in order to get back on track with the much publicized inflation target of 2%. The success if Abenomics depends on it.