If you read most media reports on People's Bank of China's latest monetary policy direction, it would seem that the central bank has only been focused on some targeted stimulus initiatives.


Want China Times: - China's central bank said on Wednesday that it will continue to implement a targeted approach in monetary policy in the second half of 2014 and shore up weak links in the economy.

More financial support will be provided to rural areas and small businesses to reduce their financing costs, according to a statement on the website of the People's Bank of China.

But are the central bank's initiatives truly as limited in scope as these stories would make us believe? Recently the PBoC has been experimenting with some unconventional policy tools that make it rather difficult to assess how loose the overall policy has been.


Xinhua: - The People's Bank of China has developed two or three monetary tools to guide short- and medium-term interest rates via an effective monetary policy transmission mechanism, said PBOC Governor Zhou Xiaochuan on the sidelines of the China-US Strategic and Economic Dialogue in Beijing on July 10.

Pledged supplementary lending [PSL], a lending instrument backed by collateral, is a new monetary tool to guide medium-term interest rates.
...
"The PBOC is becoming increasingly reliant on innovative monetary tools. It's trying not to adjust interest rates or the reserve requirement ratio, because these aren't good measures to control the direction of capital flows. So the central bank is putting greater emphasis on targeted adjustment by using tools like re-lending and PSL," Zhu said.

And there are other indicators of China's monetary policy, such as loans to the private sector (below) and the exchange rate policy.

Bloomberg has developed an index that combines some of these measures in order to assess just how loose the overall monetary policy has been. The results seem to indicate that the level of stimulus has actually been significantly higher than one would surmise from the media reports.

Bloomberg’s new China Monetary Conditions Index -- a weighted average of loan growth, real interest rates and China’s real effective exchange rate -- rose 6.71 points to 82.81 in the second quarter from the previous three months. That’s the biggest jump since the July-September period of 2012, with May and June’s numbers the first back-to-back readings above 80 since January 2012.

With the inflation rate subdued (chart below) the PBoC has been free to let the flow of credit going full speed. 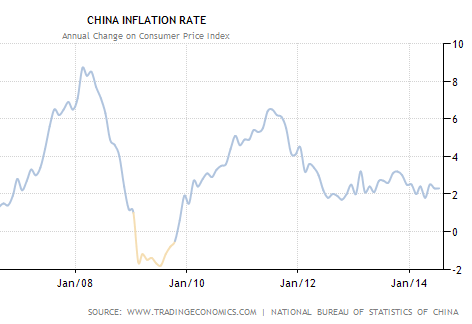 In fact the overall credit expansion across China - including the so-called "shadow banking" - has been tremendous.


And while some have been expecting a slew of defaults this summer by a number of overextended companies, the availability of easy credit allowed firms to simply roll their debt - for now.

China's policies, including the PBoC's activities, continue to facilitate flows of enormous amounts of stimulus into the economy via credit expansion. It's no longer the direct injection of capital that Beijing used to undertake, nor is it the reserve ratio targeting by the PBoC. Instead, the nation has developed an incredible appetite for debt and the authorities in Beijing are happy to oblige in order to maintain economic growth targets.