An Offshore Swan: Could the next financial crisis be sparked by China being pulled into the Currency War? 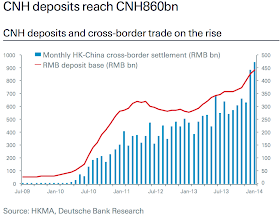