Troika to extend the unsustainable Greek debt by decades

The Euorzone leadership remains uneasy with the third bailout of Greece. This unease can be seen in the recent delay to the start of the negotiations, with the Troika staff in Athens siting "technical issues". The actual reason has to do with the fact that Greece's creditors have yet to reach an agreement among themselves. Apparently some Eurozone nations are still pushing for additional requirements that go beyond the austerity measures the Greek parliament recently passed.

The challenges surrounding the new bailout are severe. The intrusive nature of reform enforcement by the creditors is likely to worsen the already intense animosity in Greece toward the Troika institutions.


Bloomberg: - Previous memorandums committing Greece to enforce reforms on everything from the rules of bank recapitalizations to evaluating the “impact of the changes in milk pasteurization and sale procedures,” have prompted dissenters to claim that Greece has turned into a “debt colony.” Creditors argue that changes are necessary to stabilize the country’s finances and set it on course to sustainable growth.

Furthermore, the negotiations will once again be taking place "under the gun" as the next payment to the ECB of over €3bn is due on August 20th.

Assuming the deal will be completed in August as the can gets kicked much further down the road, Greece is being set up for a massive maturity wall, with little chance of principal repayment. And any form of debt principal forgiveness is off the table.


Natixis: - [Greek debt forgiveness] is unlikely to come about given the opposition of many Member States (Germany notably), the position of the Eurogroup over this issue (“nominal haircuts on the debt cannot be undertaken”) and the legal obstacle (measure would be in breach of Treaty). Under these conditions, this leaves one option, namely a re-profiling of Greek debt without touching the principal.

Out of the EUR82bn-EUR86bn lent by the ESM, part could be applied to repurchase the debt held by the ECB and to repay early the IMF (which in total would represent EUR25bn). [It] follows that the financing requirement of the Greek State, assuming there is a 20-year grace period and repayments are spread over 40 years, would correspond to the primary balances and repayments of principal and interest in respect of market debt held by private creditors (i.e. TBills, GGB PSI, new GGB and debt issued under foreign law)

According to Natixis here is what the liability term structure is expected to look like after the completion of this third bailout. How Troika lenders can possibly get comfortable leaving a small nation with this type of a debt profile is unfathomable. And yet, this is the most likely outcome of the upcoming negotiations.

Rude awakening for those who ignored the energy markets' warning signs

Back in February (see post) numerous equity investors refused to believe that a crude oil recovery is likely to be unsustainable. Many viewed this as a buying opportunity - just as they did in 2011 when such "bottom fishing" strategy worked. "Look at the declines in oil rigs" many argued - US crude production is about to dive. Even some in the energy business were convinced that crude oil recovery is coming and we will be back at $70/bbl in no time. It was wishful thinking.

There is no question that North American production of crude oil is stalling. However for now it remains massively elevated relative to last year.

More importantly, many fail to understand just how flexible US crude production has become - the time to bring capacity on/off-line has shrunk dramatically. Furthermore, a great deal of production in the US is now profitable at $60/bbl and even lower as rig efficiency rises. Many view this as unsustainable because new exploration is halted and existing wells are being reused. But there is enough staying power here to continue flooding the markets for some time to come.

The ability to bring capacity back online quickly is the reason we saw US rig count unexpectedly increased last week. This creates a natural near-term cap on crude prices, above which production can rise quickly.


To add to the market's woes, the Iran deal threatens to bring materially more crude into the market in 2016, while immediately releasing a great deal of stored crude the nation currently holds.


Moreover, the Saudis are ramping production to record levels, as the OPEC members are left to fend for themselves. The Saudis will attempt to recover some of the lost revenue with higher volumes. 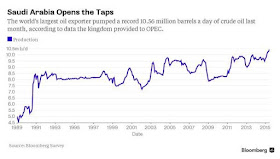 Crude prices in the US fell below $50/bbl in response to some of these developments. So much for the "recovery".


All of a sudden, as investors realize that crude oil price recovery could take years, energy firms, particularly those focused on exploration and production (upstream), don't look that attractive. The chart below shows the relative declines of the overall energy sector as well a the upstream companies' shares over the past year (down 29% and 51% respectively).


And even those who were betting on the M&A activity providing support to share prices are having second thoughts, now that the Backer Hughes acquisition by Halliburton may face challenges.


To make matters worse, many energy firms continued to borrow as prices declined. With no recovery in sight, credit markets are becoming much less forgiving. In traded credit markets for example we see spreads widening out again - with oil services and equipment getting hit particularly hard.


The US energy industry is undergoing its most challenging period in decades and for many firms the worst is yet to come.


The Governor of the Bank of Canada (BOC), Stephen Poloz, was not kidding when he warned that the first quarter of 2015 would be “atrocious.” After a respectable fourth quarter in 2014, the Canadian economy took a turn for the worse: domestic demand fell by 1.7%, owing to a huge drop in business investment, while the other components of GDP barely registered positive results (see Chart 1). 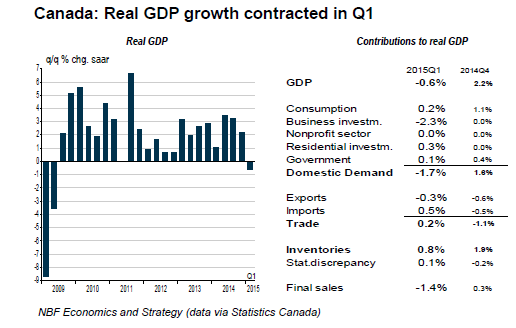 Canada is still suffering from the oil price shock, as much of this drop in business investment is from cancelled oil projects and lowered expected future production. Anticipating a weak first quarter, the Bank of Canada lowered its overnight bank rate from 1.00% to 0.75% in January both as insurance against a particularly bad performance and to weaken the Canadian Dollar. The BOC hoped that lower borrowing costs and a cheaper currency would sufficiently increase capital formation and improve Canada’s trade balance—especially with the U.S—to offset expected energy-related contractions.

Did the BOC purchase enough insurance?

In a separate survey Statistics Canada said capital spending in the non-residential sector is expected to decline a further 4.9% from 2014, while investment in energy is expected to decline by another 10%. Clearly, cutting the bank rate is not generating the new capital formation that the BOC desired, and it is becoming apparent that Canada cannot count on new investment to turn the economy around. With business reducing investment and consumers spending less, the two major engines of growth are idle at this important juncture. Can Canada rely on exports to revive the economy?

Canada has one of the world’s most ‘open’ economies (surpassed only by Germany in the G7), where exports compose about 30% of total national income. Thus, lower export cost should yield strong growth effects. As mentioned above, the BOC weakened the Canadian dollar by cutting rates in January. The Dollar has fallen almost 20% in the span of 6 months and remains under pressure.


Despite this effort to improve balance of trade, Canada continues to generate widening trade deficits.


China’s weakening demand has put renewed pressure on Canadian exports: the export volume of metals and related products are down by 7%; volumes of minerals ore fell by 9%; and energy volumes were down 6.5%. The only bright spot was a modest increase in automotive exports. Overall, the merchandise trade deficit widened to $3.3 billion and Canada ran a trade deficit with the US in May—its first since 1990.

Does the Canadian Dollar need to fall further to stem the outgoing tide of widening trade deficits? Economists at CIBC, tried to determine a ‘fair value’ for the Dollar and explain why the currency devaluation has failed to reduce the current account deficit: their model showed that the Canadian Dollar has been overvalued by 10% since 2009. The overvalued currency served as a form of monetary tightening. As the economists conclude: “given that we spent over 70% of the time since 2009 with core CPI under 2%, it shouldn’t be a huge surprise that our analysis suggests that monetary conditions have been tighter than the BOC’s official rate.” * It is apparent from this analysis and recent trends that Canada is in need of monetary loosening.


To avoid the technical measure of a recession, the economy needs to record increases of 0.2% and 0.3% in May and June, respectively---- a tall order given the performance to date. Analysts are whispering among themselves on the probability of a full recession by the end of the summer.