The expectations of a fed rate hike are collapsing, even in the long term

After the FED's decision of 17th September leaving interest rates unchanged, a great confusion has spread throughout the markets. The varied opinions have oscillated from the “disappointed” who were expecting, if not a rate increase, at least clear commitments towards a steady normalization path and the “crypto-hawks”, that have been arguing that the FED was only temporarily retreating only to accelerate the hike cycle in the following months. To be sure, Yellen and her spokespersons have not helped the markets to form a solid idea, by alternating contrasting declarations over just a week or more. Whatever the case, a view is crystallizing in the markets: the coming rate increases will be significantly smaller. This also holds true in the long term.

By looking retrospectively at the data, we have to admit that the “hold” decision was not unexpected at all by the markets (Figure 1). 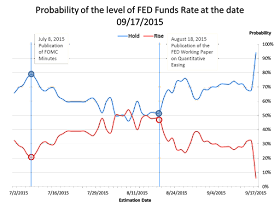 In fact, the implied probabilities calculated from the Futures' Prices on FED Funds tell us that the odds of a rate hike had been stable around 30% since mid-August: the markets were expecting a dovish decision and the FED was aware of it. It is interesting to analyze the main drivers of the operators' expectations, in the period July-September 2015 characterized by a frantic high volatility and a huge slip of the values on the equity side, connected with the Greek crisis (July 2015) and then with the Yuan's devaluation (August 2015).

Paradoxically, the expectations of a FED move on rates were largely unaffected from these two large regional crises at least in a direct way. The stark fact is that the markets have reacted punctually only to direct FED declarations. The perspective is perfectly logical: the FED is in charge to evaluate the broad macro-economic context while the markets follow closely the central bank guidance. In July, (see again Figure 1) one can appreciate a sensible increase of the odds of a rate hike in correspondence with the publications of the FOMC minutes the 8th of July, where the FED was shaping a definite track for the normalization of rates within the end of the year. The probabilities went up for the entire month of July, despite worsening of the Greek drama, the threats on China's slowing economy and the endless doubts about the real health of the US economy.

The second turning point that reversed in a decisive way the markets' expectations is the 18th of August; it’s worth noticing that during this day the FED released a discussed report in which it casts serious doubts on the effectiveness of the Quantitative Easing in boosting US GDP and inflation. Notably the 12th of August the People Bank of China had decided to abandon the Yuan's peg to the Dollar, igniting therefore a massive turmoil on world equity and FX markets, but the probabilities were remaining fairly constant until the FED report was published.

Again, the markets have waited for the “true interpretation” - via official documents - of the developments in the macroeconomic environment to adjust their expectations about the future evolution of interest rates. Other events affect short-term dynamics and boost expectations volatility but do not change the general trend “imposed” by FED guidance.

At the end of September, it seems that the games are done even for the FOMC October meeting (Figure 2). In this case, it’s not surprising that the main shift of expectations is given by the “hold” decision of the 17th September. 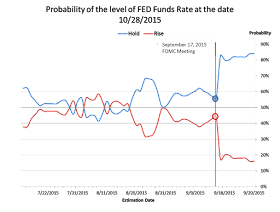 The general consensus, reinforced by Yellen's declaration of the 25th of September that “a US rate rise is still likely this year”, is that the hike cycle should begin with the FOMC December meeting.

Nevertheless (Figure 3), the odds of a rates rising in December are generally decreasing. Indeed since 17th September it appears a bit more plausible that we will have the continuation of a loose monetary stance. Yellen’s statement has impacted on the numbers only to a limited extent, even if it has influenced the estimates for a few days - until the market participants have realized that no new official decisions were on the table. 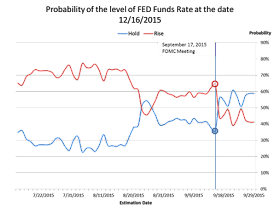 What’s happening on the long-term expectations? Intriguingly, irrespective of the official statements and the media gossip, they are cratering at all the time horizons analyzed (Figure 4). 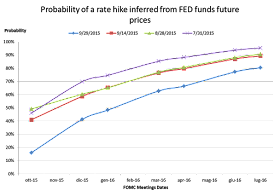 In less than two months, we can observe a reduction of 23% of the probability of a rate rise within the horizon of March 2016 and over 15% within the July horizon. Moreover, one can see the first significant change of expectations during the month of August and a second shock with the decision of the 17th of September. A focus on the future date of the July 2016 FOMC meeting (27th of July, 2016) confirms indeed that the August shift in long-term expectations is connected with the publication the 18th of August of the FED report on the effects of US Quantitative Easing. 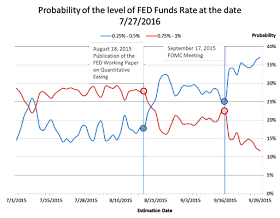 Figure 5 shows that markets estimate a more likely scenario to be a restrained interest rate increase, in the order of 25 basis points. The probability of a growth of the FED target rate of more than 50 basis points even on a longer time span is losing momentum  rapidly. This forecast would be coherent with the framework of a slowing world economy, persistently low commodity prices and global deflation perspectives. The FED should indeed weight the risk of being caught in a zero interest rate environment trap by the time the next recession hits the US economy.