How fast can the Canadian economy grow? What can Canadians expect now that commodity prices have plunged and the country is running a trade deficit?

These questions take on greater significance with the shift in political power to the Liberals who campaigned on growth through fiscal stimulation and government deficits.  Government revenues are tied closely to a nation’s capacity to growth; higher incomes provide room to stimulate the economy without generating deficits. This blog discusses Canada's potential  and expected growth against weakened commodity prices, a slowing international economy, and accompanying deflationary pressures.


What is behind Canada's Poor Economic Performance

Both Canadian labour force and productivity have grown by 0.9% annually. The combined growth of 1.8% , however, is insufficient to provide full employment; unemployment averaged 7.2% over the period well above conventional estimates of full employment around 5%.

Changes in the labour force are basically predetermined by demographic trends, but changes in productivity are quite variable. Capital investment and technological innovation affects the efficiency of every worker. Human capital in the form of worker skill and experience also generates greater labour efficiency.

While Canadian capital investment varies from year to year, investment has steadily declined over the past few years.  The trend is for increases in  capital expenditures to continue to decline, especially in the resource sector. This steady reduction in the growth of investment contributes to the mediocre labour productivity.

One reason for the slowdown in capital expenditures relates to capacity utilization. As long as there is excess capacity, a corporation does not feel compelled to expand its facilities. Chart 2 shows the persist decline in the capacity utilization rates for Canada. Lower operating capacity means lower output levels and a reduction in the work force. The combined effect of low capacity utilization and jobs losses puts Canada even further below its potential growth path. 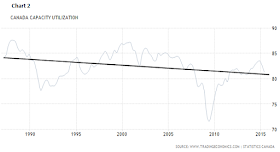 On the demand side, Canada continues to struggle. Gross Domestic Product over the past 12 months has increased by just 1%; industrial production rose only 0.6%; and the unemployment rate moved up slightly to 7.1%. Canada continues to operate below potential in part because domestic demand is insufficient to restore economic growth.

This has been a major concern of the Bank of Canada (BoC). In its October 2015 Monthly Policy Report, the BoC raised the issue of how capacity continues to be destroyed.

The BoC points out that the boom in commodity prices since 2001 generated strong investment in the extraction sector, increasing demand for labour, raising wages, and attracting workers from other sectors. This significantly raised production capacity, especially in Western Canada.

However the energy sector's expansion resulted in other sectors contracting. Over the same period,  non-energy sectors struggled mightily against the appreciating Canadian dollar.  Industry Canada estimates that 300,000 manufacturing jobs have been lost in Ontario and Quebec since 2004. The BoC argues that "in the non-resource traded-goods sector, firm exit was widespread and some physical capacity was destroyed which would, therefore, be not available for subsequent expansion." Estimates for the amount of destroyed capacity range as high as 5% of total economic capacity.


The Canadian Association of Petroleum Producers estimate that in 2015 the industry will suffer 150,000 job losses. Furthermore the industry expects losses to continue and lowered its production forecast by 20% for 2030 because of large cuts in capital investment (Bloomberg News, Oct 29, 2015).

Canada’s productive capacity is experiencing a ‘double whammy'. Non-resource sectors have a long way to recover from a higher Canadian Dollar in 2001-14, and now the resource sector must contend with 'blowback' from the collapsing commodity markets. In sum, the nation's industrial capacity has been whipsawed and potential growth remains constrained.

What are the near- to medium-term prospects of enhancing Canada's potential?

The BoC believes that "in the current environment, declines in investment in the resource sector are occurring faster than increases in investment in other sectors… the differences in timing  of the response… imply that potential output growth is more likely to be in the lower range of estimates." In a word, our expectations have to be tempered.  The BoC estimates that the best the economy can generate is growth of 1.8% annually and that will still result in about 1.5% slack each  year until 2017 .The danger lies in continuously growing below potential. That implies that there is continuous underinvestment, slack in the labour market, and a general underutilization of available resources. Should these conditions persist, then potential will decline further. 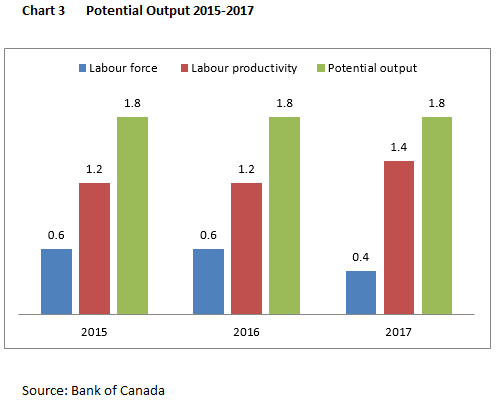 1. Canadian growth potential has been lowered in large part because of dramatic changes in the world markets for our goods , both energy and non-energy.

2. Non-energy firms need to improve their competitive positions and take advantage of the lower Canadian dollar with greater exports.

3. The resource extraction sector will continue undergoing painful adjustments as it aligns future capital investment to meet the reduced demand for oil, gas, and other commodities.

4. The big issue concerns the fiscal side. As the economy adjusts to slower growth, the concern is that governments at all levels will be challenged to generate revenues to meet voter expectations for new expenditure programs. Yet without greater fiscal stimulus the economy will not be able to return to move positive growth path.