Almost without warning, the Eurozone government bonds and the Euro experience spikes in volatility this past month. These abrupt movements are clearly correlated with the mayor announcements of a change in monetary policy by, initially by the ECB and then, by the FED. The European banks had been actively pursuing front-running strategies which try to anticipate ECB's moves until the beginning of Quantitative Easing program (PSPP). Not always with success, as experienced with the “flash crash” of April and June. The new game plan spectacularly backfired with the hawkish statement of Ms. Yellen during the FOMC of the 28th of October. This igniting a massive sell-off of Eurozone bonds with an intensity comparable to the previous “flash crashes”.

At the October 22 meeting, Draghi has clearly anticipated an acceleration of the monetary easing policies. He hinted at cutting the deposit facility rate (now at -0.2%) by at least 10 basis points and at increasing the pace of asset purchases. Finally, the ECB strongly suggested that the PSPP program may be extended for another 6 months. Both policy moves were designed to counter a strengthening Euro. 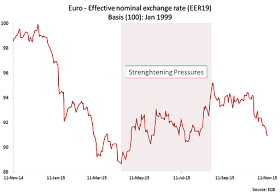 In August it has become apparent to the European policy makers that a stronger Euro was having an adverse effect on the Eurozone’s balance of trade (Figure 2), thus harming the export driven recovery envisioned by the ECB. 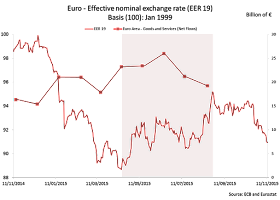 Since a rising currency was not seen then with favor by the ECB, the market began to evaluate a further monetary easing by the ECB as very likely, especially a reduction of the ECB deposit facility rate. This, in turn, resulted in the European banks resuming their hoarding of government bonds and pushing yields to very low levels in the following month. Even issues characterized by negative rates slipped below the deposit facility rate (Figure 3) thus becoming ineligible for the ECB purchase under the PSPP. 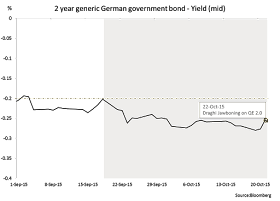 This buying behavior would have made sense only if banks were expecting an interest rate cut. In fact, only bonds with a yield higher that the deposit facility rate are eligible for PSPP purchases: by lowering the deposit rate, the ECB is automatically widening the pool of purchasable bonds. In this scenario, the owner of the now eligible bonds would have been in the best position to exploit the jump in the value that one should expect due to the increased demand, as the ECB steps in.

Evidently, the chance of a rate cut was in the air. After the Draghi declarations, markets experienced a manic buying that has depressed yields to deep negative levels never experienced before (Figure 4 and Figure 5). 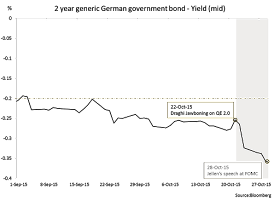 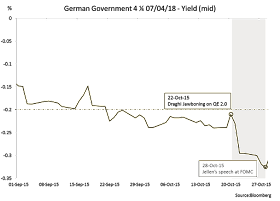 Clearly traders were pricing in the hinted cut of at least 10-15 basis points and were taking long positions on the short part of the Eurozone government term structures. The EUR / USD weakened accordingly, down of 20 pips.

Then, something happened that European banks were not expecting . At the FOMC meeting of 28th of October, MS Yellen released a hawkish view; expectations of a rate hike were brought forward to December. This can be easily appreciated by looking at the probability of a rate rise as inferred from the Futures' Prices on FED Funds (Figure 6). In a single day, the odds of a rate hike surged from 35% to 50%. 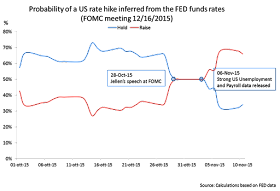 This sudden reversal, from the previous FOMC meeting in September, had a clear impact on both the Euro and the ECB interest rate policy. The EUR / USD slipped another 20 bps; almost, instantaneously, the currency fell below the threshold of 1.1. This renewed trend towards a weaker Euro (-7% in two weeks, Figure 7) has unintended consequences for the front-running strategy of European banks: in fact less pressures on the exchange rate have given immediately more room to the ECB to delay or partially scrap the idea of a “QE on steroids”. Suddenly, the strategy of storing ineligible bonds with deep negative rates to front-run the future (but not so certain anymore) deposit rate cut was no longer attractive to Eurozone banks. A selling spree ensued immediately after Ms. Yellen’s speech. 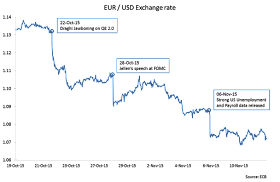 This pattern was further reinforced after the release of the stronger than expected data on unemployment and payrolls in the US for October. Traders adopted a 70% probability of a US rate hike in December. Predictably, the EUR / USD took another hit downwards of almost 20 bps. The sell-off of Eurozone bonds with negative yields accelerated in the following days (Figure 8). 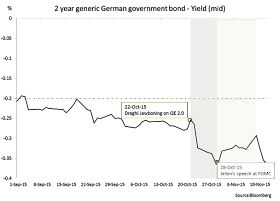 What will be the probable dynamics of the Eurozone government bonds in the coming weeks? As the ECB proceeds with the QE program, the pool of eligible assets will continue to shrink at a rapid pace; it’s not a case that the ECB is considering for purchases also municipal bonds issued by the main European cities. The illiquidity of a contracting market and the ever-changing expectations about the delivery of a QE 2.0 will surely put Eurozone bonds under further stress in the coming weeks.