The worldwide collapse in commodity prices is now working its way through the financial markets in Canada.  Canada is just now experiencing  fundamental changes in the financial community, the sector  better known as F.I.RE  ( Finance, Insurance and Real Estate ) . This sector accounts for approximately 20% of national income and employs more than one million workers, providing a  broad spectrum of  services to all parts of the economy. One subsector, in particular, the investment or securities industry has been hardest hit of late.. This blog examines the adjustments in the securities industry; future blogs will look at the banks, life insurance and real estate markets.

To appreciate just how much the F.I.R.E. industry has suffered , we turn to the TSX and its major components as listed in Table 1.  In the period 2007 to 2014, the Canadian stock market as a whole fell by 4%. However, the  financial sector as a whole  performed relatively well increasing by some 21%, largely on the back of the commercial banks, supported by good loan  growth and capital market activities.  However, within the investment community, independent investment houses have taken quite a beating. The two publicly traded companies, GMP and Canaccord, have seen their corporate value been  truly been decimated ( a price drop of  80%) . Finally, the lifecos have yet to recover from the 2008 crisis and continue to see their stocks trade well below pre-crisis levels ( as much as 60% lower). 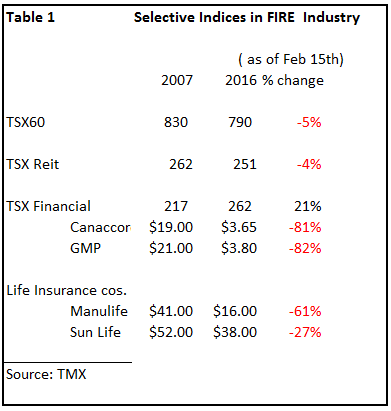 These  trials and tribulations  continued over the past 12 months as all segments of the FIRE industry have seen values drop further.  Along with the decline of the TSX60 , the finance sector is off a further 19% , partly in concert with  the decline  in world stock markets, but more reflective in the fall in oil and other commodity prices. Even the much vaulted Canadian banks are feeling the impact of losses in the energy sector. REITs which have been a haven for investors are now in decline( off by 18%). And, of course, the investment dealers continue  their slide as they suffer under the weight of several factors unique to the industry. We now turn our attention to those issues.

The securities industry, and in particular, the independent dealers are crucial to a well-functioning capital market. The big six banks have swallowed up major investment dealers in the 1990s; they use these  investment firms to continue to fund large publicly traded companies . Independents, on the other hand, supply funds to  small and medium size industries, especially in the  resource and tech sectors. Often these companies are deemed  too risky to qualify  for  conventional bank lending . Thus, they have filled an important gap in the capital markets and their  current weakened position will have an adverse impact on  the effectiveness of the Canada's  capital markets to promote economic growth.

These are not happy days for the investment dealers. Revenues are weak, costs are escalating and the nature of their business is undergoing structural changes.
The number of firms have declined as part of a wider consolidation as profitability is squeezed throughout the industry. Chart 1 illustrates the change in revenue sources between 2007 and 2015. 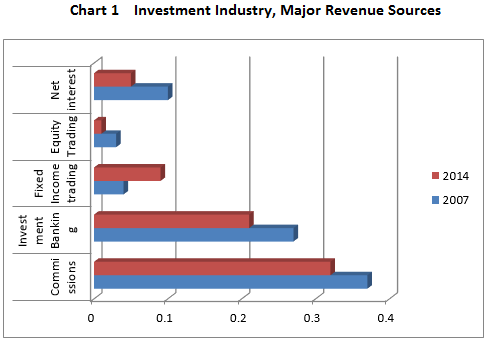 With the exception of fixed income trading, all categories of revenues have declined, especially equity trading commissions and investment banking fees - two stalwarts of  the past. Table 2 summarizes the main financial operating results of the past 12 months. The two notable impacts have been  the reduction in revenues and the rise in the  cost of operations. Overall, profitability is dismal compared to prior years--- 4.6% rate of return in an industry accustomed to rates of 20% or more. As a result, shareholders' equity has taken a beating, forcing weak companies out of business and others to shore  up capital to meet regulatory requirements. What is behind this poor performance? 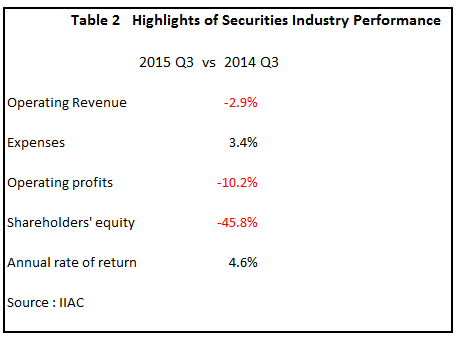 A series of  radical changes  has hit the industry simultaneously :
The industry features many small independent, boutique -size firms that no longer can compete for capital; the bulk of the firms are capitalized at $10 million or less, precluding them from participating in larger financing deals. Russell expects a further consolidation as firms either merge and/or shut down.

The IIAC recently conducted a survey of its members on the outlook for the industry.
The majority of members remain pessimistic , citing the following:
It is no wonder that the majority of the industry leaders expect further contraction in the coming years as part of shake out in the industry . It may turn out, in the longer run, that the Canadian capital market will benefit from this re-structuring and may be stronger as a result. However, at present,  the principal concern is that this consolidation will negatively affect the  viability of the industry to participate in the financing of future economic growth.