The Decline in Canadian Business Investment

Business Investment  “depends on the prospective yield of capital, and not merely on its current yield” , John Maynard Keynes

One of the many puzzles of the recovery since the 2008 crisis has been the corporate sector’s reluctance to add to a nation’s capital stock. Investment in new plant and equipment along with the construction of new productive facilities has lagged behind the experience of previous recoveries. Throughout the industrialized world, the rate of growth in fixed capital investment has been dismal, resulting in below average rates of growth in national income. The decline in business investment has been quite dramatic. In North America business fixed capital investment is running 20 percent lower that recorded in 2007. (See Chart 1)


This dramatic weakness in capital formation is worrisome given all the factors that one would expect would generate a flourish in capital expenditures. Central banks have implemented unprecedented monetary stimuli in the form of zero interest rate and quantitative easing, contributing to the dramatic fall in long-term interest rates. Corporate profit margins are at historic high, and retained earnings continue to grow. And, equity prices remain quite elevated--- all these developments should provide the corporate sector with the enthusiasm to undertake capital investments. Yet, that sector continues to display weakness, contributing to what the IMF characterizes as the`` new mediocre`` growth performance. What lies behind the failure of business investment to expand?

The Decline in Corporate Profits

The first clue to this answer lies with the slump in corporate profits and corporate profitability. Chart 2.1 and 2.2  shows the significant fall-off in the level of corporate profits in the United States and Canada over the past two years. The principal reason for this decline is the failure for the revenue to grow. Profits would have been even weaker had wage growth not been contained. 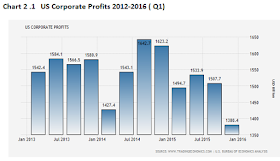 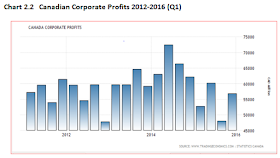 The Canadian experience exemplifies what lies behind this profit weakness. If we look at the rates of return on equity and on capital employed, we see that there has been a steady decline in returns to investment for all industries and in particular for non-financial industries. (See Chart 3). Whereas the Canadian non-financial companies return on total capital employed registered  6.7 percent in 2104, by the first quarter of 2016 these returns fell a full 100 bps. Clearly, the capital employed was not churning out profits as before, casting doubt on the effectiveness of the investment already in place, let alone what could be expected on new ventures. 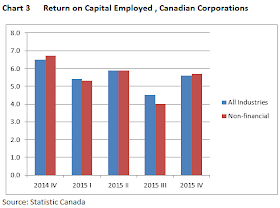 A recent survey by Statistics Canada on capital spending paints a very disquieting situation. Total spending intentions are expected to fall by 4.4 percent led by a decline of 9.3 percent in the private sector which accounts for about two-thirds of total capital investment. Moreover, expenditures in manufacturing are poised to drop by 11 percent. It is no wonder that the forecasts for the Canadian economy remain tepid. The real engine of growth is badly misfiring.

In addition, there is considerable excess capacity in all sectors. Capacity utilization ratios are currently running at 75 percent compared to the longer-run average of 80 per cent. (See Table 1). With excess capacity and falling rates of return, Canadian corporations have no real incentive to undertake capital investment.

The Bank of Canada, in its most recent monthly report ( April, 2016) concluded that Canada's potential GDP growth has weakened over the past year.Potential GDP is comprised of the growth in the labour force plus the growth in labour productivity. The Bank downgraded Canada's  potential GDP growth from 1.8 percent to 1.5 percent.( see Table 2).  Labour productivity growth will exhibit a marked decline over the next three years, according to the report.  The Bank argues that since 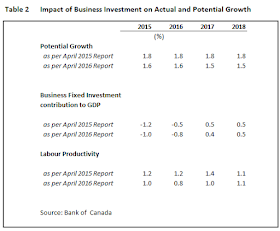