What the Bond Market is Telling Investors

Over the past month, the global bond markets have been sending out signals that all is not well with the global economies. Initially, the surge in negative nominal rates in Europe and Japan rattled many investors in both the fixed income and equities markets. This historic development suggests that large-scale investors are anticipating low growth and disinflation for many more years. Simultaneously,  the yield curve, especially in the US, has been flattening, again signalling that growth is slowing, giving the policy makers considerable  pause in their deliberations on the course of future interest rates. This blog examines both these developments to help the reader understand the signals coming out of the bond markets around the world.

Nominal and Real Rates of Interest

For more than a year, short to medium term rates of interest in many countries have landed in negative territory. The ECB instituted negative overnight lending rates in an effort to discourage commercial banks from depositing excess reserves with the ECB; instead, these such funds should be made available to their borrowers in the hope of stimulating loan demand throughout the region. More recently, the ECB started to buy, initially, longer dated sovereign debt from member countries in the expectation that long-term rates would fall to stimulate investment growth. Now, the ECB has expanded this quantitative easing program to include investment grade corporate bonds. Purchases of both types of debt exceed 80 billion euros a month, as the ECB pulls out all stops in pursuing its goal of re-inflating the EU economies. The result of this combined effort is shown in Table 1 which reveals that major  European countries and Japan now live under a regime of negative long-term rates.

Of more significance is the measure of real rates of interest--- nominal rates minus the rate of inflation. In some countries, real rates have turned negative ( e.g. Japan, Switzerland, and Canada) and in other countries, the real rates are barely in positive territory ( e.g. Germany and France). The key takeaway from Table 1 is that the industrialized nations now offer 10-year bonds at real rates that are less than 1 percent, well below the long term  historic rate of 2 percent. 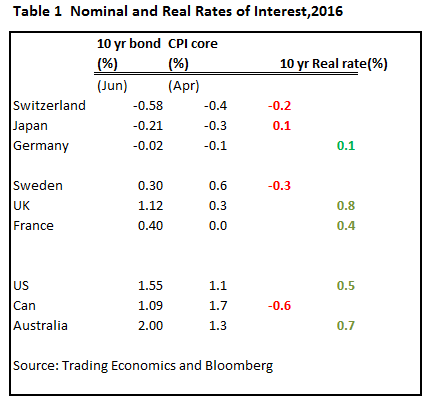 The yield curve represents what investors are willing to accept by holding debt over short, intermediate and long-term periods. A typical yield curve is sloping upwards since longer term investors normally require a greater return to compensate for the risks of holding debt over many years. The extra return - referred to as the term premium - reflects the investor's view of future economic growth and inflation among other considerations.  A rising term premium reflects concerns over excess supply of debt, credit quality, and higher inflation in the future; a falling term premium has these factors moving in the other direction.  Over the past year or more, the term premium has fallen significantly, hence the fall in long-term rates.

Changes in the slope of the yield curve signify changes in the economic outlook. Over the past few months, the yields on long-dated US Treasuries, 10 years and up, have fallen and, at the same time short term rates have moved up. ( see  Chart 1)  These two developments are related. Short rates have moved up  in anticipation of the Fed increasing its overnight interest rate. Fed Chairperson, Janet Yellen, has spoken of the need to increase the policy rate in " the coming months" and other members of her committee have voiced similar views. In its most recent policy meeting, the FOMC continues to hold out the possibility for at least one or more rate increases before year's end.  At the same time, investors in the long end of the bond market are saying that any short rate increases will have a detrimental effect on economic growth and that any policy shift must weigh that consideration. In effect, the long end of the curve is saying: increase short rates at your ( Fed`s)  peril. 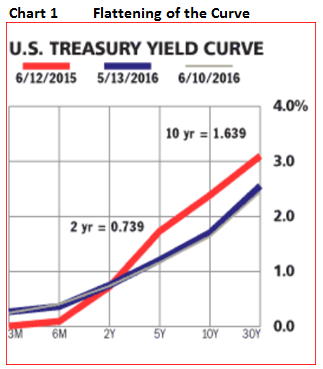 Chart 2 maps out the change in the spread between 2- 10-year yield. It has narrowed from 170 bps to 90 bps over the past year. In part, the 2-year rate moved up sharply in response to the Fed signalling that it wants the bank rate to move up this year as part of its objective to “ normalize” rates. But it is the falling long-term yields which are most disconcerting. It signifies that the investors expect future growth to be weaker and that they also expect future inflation to be lower than was previously forecasted a year earlier ( Chart 1). It is the change in expectations that we need to focus upon. 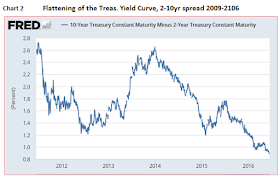 There has been a dramatic shift in the way consumers' view future inflation.  The University of Michigan surveys reveal that there has been a persistent decline in the expected rate of inflation over the next  5- 10 years (Chart 3). In the 1990s, consumers expect annual inflation to exceed 4 percent; by 2010-15,  consumers' expectations have dropped down to well under 3 percent. In its most recent survey, U of M discovered that consumers expect inflation to average just 2.3 percent for the next 5 years 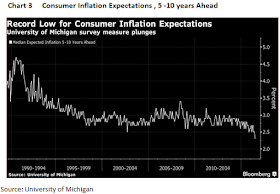 Investors have also adjusted their inflation expectations. One measure of inflation expectation is the 5-year breakeven inflation rate. This is the difference between the 5-Year Treasury bond rate and the yield on an inflation-protected security with 5-years remaining to maturity ( so-called TIPS). Chart 4 shows how these expectations have dropped considerably from around 2.8 percent in 2012 to 1.6 percent today.  In fact, investors have adopted a greater downward revision to their expectations than in the case of consumer groups. It is the investors who are driving the bus on the yield curve road.

Ben Bernanke has maintained for some time that the global savings rate is too high and that excess savings is fuelling the demand for debt instruments, especially quality sovereign debt. There is a lot of merit in this argument when one looks at the high savings rates in the emerging markets - often in excess of 25 percent of GDP. Even in the industrialized countries savings are relatively high. Or, alternatively, consumption is too low. Either way, excess loanable funds have to be channeled into investment, and this generates a growing demand for credit instruments worldwide.

Another explanation for the fall in  long-term rates is related to liquidity in the international bond markets. Barry Eichengreen  argues that ``international liquidity has plummeted from nearly 60 percent  of global GDP in 2009 to barely 30 percent today.` The most important form of bond liquidity is the US government bonds which are held by banks, large institutions, and foreign central governments. Recent auctions for US Treasuries feature large oversubscriptions, and this has driven yields lower. There is more than just a temporary flight to safety to quality debt; there appears to be a major shift in asset preference in favour of high-quality debt issued by the US, Germany, Japan,  and  UK governments . To the extent that new government debt issued is immediately taken up by these institutions and are essentially held to maturity rather than traded, means that there is less liquidity in the marketplace. Scarcity will drive up bond prices.


What can we learn from the recent behaviour of the yield curve?

Low yields are a symptom of  economic malaise . Although there have been many criticisms of central bankers for introducing negative short interest rates, the central bankers are not responsible for the decline in long-term interest rates. Negative interest rates are not the problem. Slow growth and disinflation are driving longer rates to historic low levels. These bond yields are not the problem but are the symptom of widespread economic weakness that is not expected to improve over the next decade.

Low inflationary expectations are well-entrenched. Clearly, the negative nominal and real rates of interest are sending a powerful signal that those economies are going to experience very low growth without inflation for the next 5 to 10 years. There is a well-entrenched view that inflation and growth will remain very subdued over the next decade.

Shortage of quality debt.There is growing evidence that quality debt remains in strong demand and highly sought-after. The decline in the term premium on long-dated government bonds demanded by institutional and central bank investors supports this assertion.

Long term rates to remain low. The combination of strong demand and supply restraints will keep long bond yields at these levels or even lower for many years. Any change in the current direction of bond yields will not come from within the market itself. Rather yields will rise only if governments resort to aggressive fiscal policies that promote growth and higher inflation. As yet, there is no sign of any policy shift in that direction, especially in the US and the EU.