Jobless claims back to reality

As discussed before (see post), "something is rotten" in the the world of unemployment claims statistics. The data has simply been wrong - though it wasn't clear where it went wrong. As many pointed out, the issue has likely been at the state level, particularly in California, where computer system changes created a backlog of claims to be reported. So California chose to send in numbers that didn't include all the claims. And the US Department of Labor chose to publish them - knowing they were wrong. At the same time economists just accepted these numbers as real, some pointing to amazing improvements in US labor markets. And now as California caught up with its "booking" of claims into their "upgraded" system, the claims spiked.


Econoday: - A giant spike in weekly jobless is mostly tied to continued counting problems in California and is only partially the result of the government shutdown. About 1/2 of a gigantic 66,000 increase in initial claims in the October 5 week reflects backlog issues in California from a computer changeover last month, while about 15,000 of the increase reflects claims from non-Federal workers including contractors who have been hit by the government shutdown. Federal employees are not included in headline claims with the latest data for this category available only for the September 21 week which was of course before the shutdown hit.

The spike is not real and neither was the earlier decline. We just got back to the original trend - plus some laid-off federal government contractors. 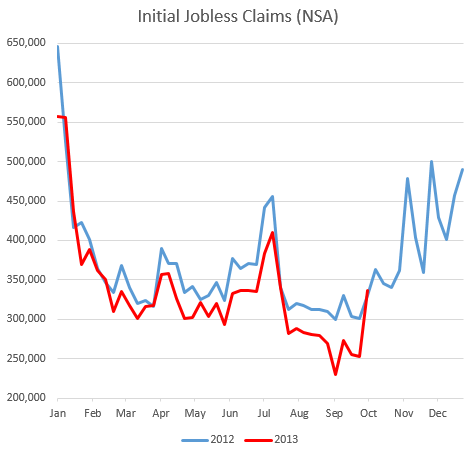